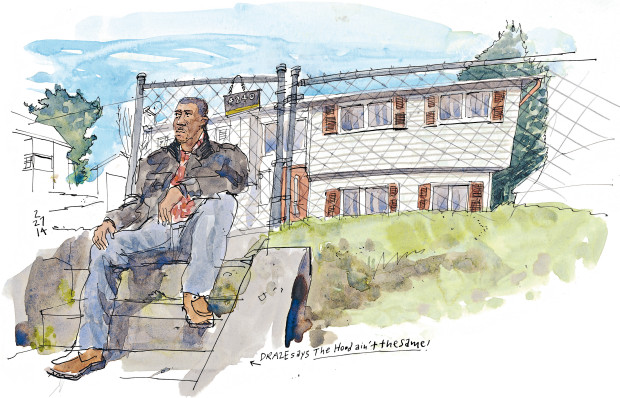 Every time I go to South Seattle and the Central District, I see more and more homes being renovated and new apartment buildings under construction. This city changes fast.

But homegrown hip-hop artist Dumi Maraire, best known as Draze, sees something my eyes have missed: The forces of gentrification are uprooting the black community.

“These used to be all black families and black-owned businesses,” Draze told me as I sketched him on the steps of his childhood home on South Orcas Street. “Nobody is here anymore.”

Including Draze, who now lives in more affordable Renton. I reached out to him after I stumbled upon a video of his most recent song, “The Hood Ain’t the Same,” on YouTube. Since he posted it less than a month ago it has been viewed more than 25,000 times.

Draze’s lyrics mention many black-owned businesses that no longer exist. What once was Sammie’s burgers on East Union Street is boarded up and covered with graffiti. The Silver Fork restaurant on Rainier Avenue South closed the day after he brought his crew to shoot the video last summer.

As he drove me around his old haunts in Rainier Valley and the CD, Draze shared his view of gentrification as eloquently as he does in his rap song: “The city is thriving,” he said, “but my community is dying. That doesn’t feel good.”