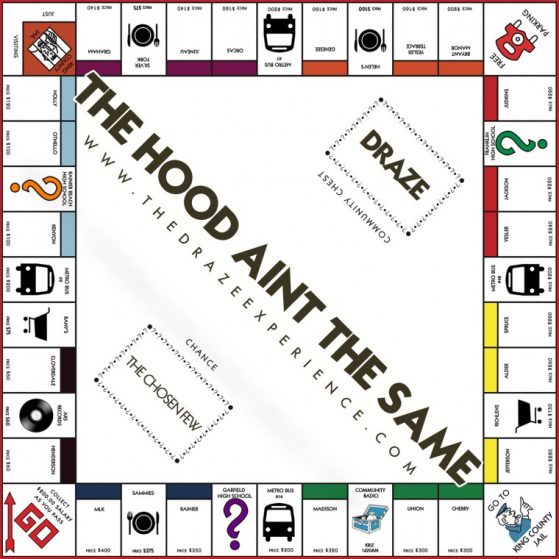 The Hood Ain’t The Same

The “Hood Ain’t The Same” video release is on the heels of the tremendously successful event “Through the Eyes of Art ” in which the video was debuted on the jumbo screen (33ft tall and 60ft wide) of The EMP Museum’s Sky Church, to an audience of over 650 people. Among those in attendance was Seattle City Councilmember Bruce Harrell, Deputy Mayor Hyeok Kim, The Urban League of Metropolitan Seattle President Pamela Banks, R&B songstress Choklate, Grammy Award-winning songwriter and singer, India Arie, and many more!

“The Hood Ain’t The Same” is a song dedicated to highlighting the effects of gentrification on Seattle’s Central area and south end communities. Throughout the video, Draze takes listeners/viewers on a journey through the rapidly changing urban areas of Seattle. Lines like “I don’t reminisce when I drive through this hood I feel pain, I ain’t proud of these new developments I feel shame…” are illuminated as viewers are treated to images of several restaurants and staples of the community that once thrived but are no longer in existence.

Along with capturing the changing faces of Seattle, the video features several cameos from Seattle area artists and patriarchs past and present. “We could have just shot a bunch of buildings but it is the people who give these structures life. We wanted to highlight some of the real people touching the real community at a grassroots level.” says Draze. The video features cameos by Eddie Rye (Community Activist), Blak Stax (Seattle Hip Hop group), Kawanna Perine (Founder of Sisters Against Lupus), WyKing Garrett (founder of Umoja Fest) Rev Aaron Williams (Senior Pastor at Mt Zion Baptist Church) and several others.

Draze is a veteran wordsmith with a unique skill for storytelling and delivering raw, emotionally charged lyrics that capture the ears of the masses. Recognizing his gift, Draze felt compelled to shed light on the topic of gentrification. “As artists, I think we have a responsibility to tell our truth to the people, regardless to how uncomfortable it may be. My city is alive but my community is dying, maybe this is my effort or Eulogy to get someone to care.” says Draze.

Available now on:
Back